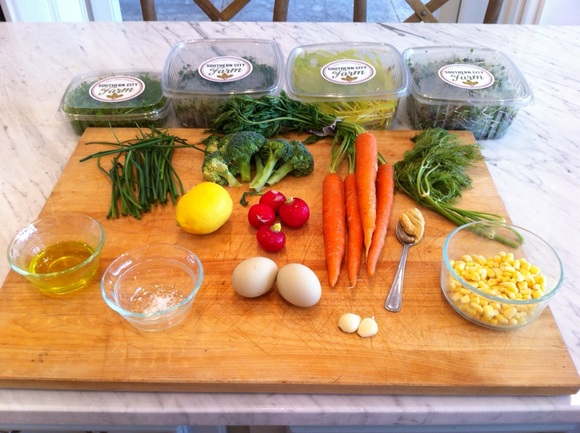 As what little remained of winter made its way in and out of New Orleans a few weekends ago, I had the urge to coax spring along by making a modern twist on the traditional garden salad using micro greens as an added component adding both flavor and texture to the crunch and substance of the their full-grown counterparts. I wanted something that respected the vegetable itself and the early green from which it develops. When I think of traditional garden salads, I am underwhelmed by images of limp iceberg, malnourished corn, stale shredded carrot, and oft-hidden specs of purple cabbage doused in a corn-syrupy “Italian”-style dressing which resembles little anyone Italian would ever create.

When it came to ingredients, here’s what I settled upon: fresh corn kernels for sweetness, spicy radishes for zip, broccoli for its green earthiness, and carrots for crunch—all vegetables I’ve grown at one point or another in my own backyard garden. I paired each of these up with its microgreen counterpart. While each microgreen resembles its full-grown version to a degree in flavor, there is certainly a unique quality each imparts which created a new dish entirely all its own. The color and contrast of sweetness and bitterness of the corn microgreen is something special. The broccoli and carrot greens served to soak up the dressing while adding the full flavor of their well-known characteristics. The delicateness and spiciness of the radish green added a texture and bite to the overall salad that would be sorely missed without it.

Having had microgreens unappealingly large before, I made sure to chop them as finely as possible so as to retain character while reducing stringiness. I chopped the vegetables themselves just small enough so that their texture was preserved but not so small that they couldn’t easily be stabbed with a fork, if need be.

For the dressing I wanted something creamy, tangy, and full-flavored. I chose to do a cross between a ranch and a typical Dijon-based French dressing. I began with chopped garlic, chives, and dill, added the juice of one lemon, a teaspoon of Dijon mustard, some Kosher salt, olive oil, and pureed in the blender with “farm”-fresh eggs from my backyard as the emulsifier to create the creamy texture. I opted for no pepper as I felt like the garlic and radish would play that role well. In the end, the resulting dressing was everything I had hoped for—the kind of flavor that enhanced the mildness of the greens and vegetables while simultaneously bonding the components together in a manner that created a composed dish.

The visual appeal stemming from the vegetables and greens is gorgeous and sure to be a centerpiece of any table. One might even consider serving the salad in a compartmentalized bowl with the dressing in the center to heighten intrigue and experience. I took pictures at various stages to show the possibilities.

Perhaps it was the balmy noon weather, but the salad hit its mark. The smoothness and tanginess of the dressing paired well with the crispness and flavors of the greens and vegetables as I sat on the back porch enjoying a sparkling water and the mild breeze blowing in the backyard. As with all matters of time and effort, there is satisfaction in both the process and the result; a lunchtime modern garden salad proved to usher in spring in just the right fashion. Perhaps contributing equally to the soothing nature of the moment was the knowledge that in 15 minutes or less, the four children would be waking from naps. 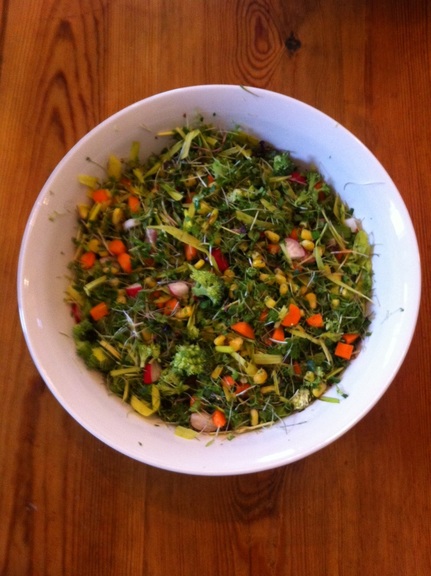 Rough chop chives, dill, and garlic. Add those ingredients and mustard, lemon juice, and eggs to blender. Blend all ingredients, adding olive oil a drizzle at a time. Finish with salt to taste and a tad of water to thin, if necessary.
Toss the greens and vegetables with dressing. Serves four.